Some of us are catching up to the fight of the century a little late. But perhaps I've had my expectations tempered quite a bit due to the word-of-mouth that's been going around considering DC's most important film this year.

DC intends the Batman/Superman fisticuffs movie to be the real launching point of its own tentpole cinematic universe building up to Justice League and a variety of standalone hero/heroine films to come. Sadly, it seems this rush to the JL line comes at the cost of its two pivitol characters. So it looks like the 'Dawn of Justice' subtitle is the very thing that gets in the way of Batman Vs. Superman. So much so that the movie ought to be more realistically titled 'Batman & Superman Vs. the Dawn of Justice Marketing Machine.'

But it's not all bad... certainly one will understand why eager fans of Batman and Superman who've been heavily anticipating this film will  walk away with disappointments. There are also several moments in the film that come of mediocre and inconsistent. But overall it's still a fairly entertaining package that most mainstream moviegoers will be satisfied if they mainly come for the spectacle.

The action scenes are entertaining with lots of amazing moments. But the problem is that the circumstances setting them up are rather ham-handed. One might even call the motivations behind various characters rather lazily written, which is odd given there is so much there thematically that would've been brilliant if only the movie could focus on precisely what it wanted to be other than a preview for Justice League. For example, there is the whole man vs god conflict, and director Zack Snyder brings this to the forefront at times with wonderful images combined with TV-like commentators just as you'd see in the pages of 'The Dark Knight Returns.' Lex Luthor is also obsessed with the idea in his paranoid attempt to overthrow God whom he sees in Superman due to circumstances of his childhood.

Another example is the theme of power-control. Can Superman be allowed to interfere with world affairs and political tensions, or does he answer to, or must must be made to work with global superpowers, a.k.a. the United States of America? Is he liable to the democratic will of the world's people? Does that idea of lawful constraints for mortal men even apply to Superman who is literally a god amongst them?

There is so much there to work with, but the film doesn't spend enough time on it and just seems to treat these overarching ideas as throw-away background material that is simply a convenient plot-mover. Once it's served its purpose, it's out of the way never to return in any significant fashion. 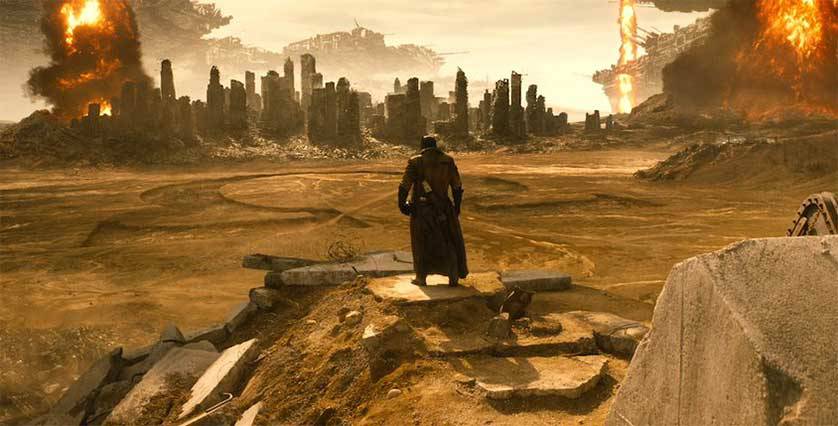 The movie wants to incorporate several significant graphic novel motifs, from 'The Dark Knight Returns' to 'Death of Superman' with the later introduction of Doomsday. Things that would've made a fine film on their own, but here might feel like potential plotlines for entire later films cut down to bare minimums. By the end of the film, one truly wonders where they can go from here after already playing a particularly significant card from Superman's history. Would this have been better saved for a much later film that would've made the moment more relevant and meaningful? An meaningful not only to the comic nerds... but also for the general audiences who'll be expected to continue following the DC Universe movies and where they're leading? Much like the epic destruction seen in Man of Steel, how will DC and WB follow this?

Already the film itself is interrupted with moments of another film yet to come with Batman randomly receiving visions of an apocalyptic future; one where it seems Superman is an antagonist who has his own armies hunting down Batman and the remainder of humanity. This feeds Batman's paranoia about him, but is not something that is ever resolved in the film and feels rather out of place, and seem to only be there so that at least one of the heroes in this film has an excuse to gather together the rest of them to form a team. A team of characters we are overtly hinted towards as other superhumans make their cameo appearances.

The most important cameo here is Wonder Woman's, who really doesn't serve much purpose in this film other than to show up at the end. Who is she? What are her powers? Such things the film just expects audiences to know already or to pre-purchase a ticket for the Wonder Woman movie to find out. Her motivation to be in this film is to find and destroy evidence of her existence from Lex Luthor's archives, which consists entirely of just one photograph... This is something she somehow conveniently counts on Batman doing for her even when they've never met and she has no idea who he is or what he's doing, and ditto for Batman. But that doesn't stop Batman from casually e-mailing her what she wants in addition to all the other data on other heroes who also don't know each other and where it seems everyone wants to make it a point that nobody knows of their existence...What is the ever-skeptical ever-cynical Batman's reason to trust her with all this information? And in a movie that seems to tackle the man/god conflict, would not an in-between character such as Wonder Woman be given a more significant reason to bridge the gap of the dilemma between mortals and supermen? Either Wonder Woman should've played a much more significant role in the film, or she should not have been there at all, because what's there seems only for her to participate in a climactic fight where she impressively holds her own and to remind you that DC intends to do further team-ups of this sort.

There are many inconsistent annoyances like this in the film. One glaring plot-hole being that the film establishes pretty well that Superman can hear particular people halfway around the world and fly to their precise location. But during the latter part for some reason he isn't able to when it would've been very convenient to in that moment. We are of course also given the idea that sometimes even Superman can miss something if he's not paying attention, but this wouldn't work in the scenario I'm describing because there's every reason that he would certainly be paying very close attention, especially considering the victim he's looking for isn't gagged or in any kind of sound-proofed housing so as to make an excuse... and the villain already establishes for us even earlier on that he is very well aware of Superman's ability to come to the aid of specific individuals just from hearing them!

Added to the issue of Superman being unable to get to this person, this attempt also acts as a motivation for Batman and Superman to fight each other. A fight that will disappoint many due to what could be seen as a pretty one-sided face-off. Only Batman has any real motivation to kill Superman, while Superman is counting on him seeing reason given that Batman is probably the only guy who can apparently help Superman out in that moment, so potentially killing him may be off the table. And the fight is once again brought to a conclusion due to another rather ham-handed solution that might have been workable if the director/writer had spent a portion of the movie cleverly building up to it, something that shows Batman & Superman's attachments and humanity and a total reassessment of what these two characters ultimately are... which in Superman's case is certainly not one of a god given that he has very vulnerable human qualities. Sadly the most frustrating thing about this film is that once you get rid of the enjoyable spectacle and reflect further upon it, you discover that there are a lot of opportunities wasted in the film to make something supremely better due to all the other Justice League clutter and plot points of convenience that bring everything down.

By all means, if it's a fun action superhero movie you're looking forward to, then Batman Vs.Superman can still be entertaining enough to be worth a matinee ticket. It's certainly not boring! And it's certainly got some really amazing things to enjoy! But if you're looking for anything more, then you're not going to find it here. You'll perhaps find it in Justice League, or Wonder Woman or even the next Batman movie which may work far better when focusing on their individual stand-alone characters. But for a movie about Batman & Superman, there doesn't seem to be much time for either of them to really be satisfying. It's a movie that is trying to juggle too much and subsequently doesn't know what it wants to be, unless that something is a quick route to the Avengers/Marvel Universe box office take.

So my recommendation would be to temper your expectations, go with the non-3D option if you want as the 3-D, while comfortable, doesn't add anything... Know that it will not live up to the hype, and that's not because the hype somehow exceeds what anyone would reasonably expect from the movie, but because the product itself is flawed in a lot of ways that make it feel amateurishly put together.
Posted by The Labyrinth at 8:38 AM