Expectations play a big role for this long-awaited Star Wars film. Expectations set up by the end of the original trilogy that fans have imagined for years; and the new world and characters and villains created for the new sequel trilogy with The Force Awakens.

The title 'The Last Jedi' in many ways means what it implies... The end of the Jedi is of course still one of the main objectives of our antagonist's; but regardless of that outcome, it will certainly be the end of the Jedi as we've known the order since A New Hope.

The weight of expectations you've had will certainly factor into your enjoyment of the film, but overall it will be an entertaining experience, even if divisive over some of the conclusions and how certain characters were handled, notably Luke and Leia. Sadly, much like how fans hopes were dashed from seeing Han Solo and Luke reunited together in the Force awakens, thoguh this was not to the detriment of the story itself, similar feelings will occur with regards to Luke Skywalker's portrayal and how we finally get to see the Jedi master in action after so long. But the film's story itself goes out of its way to state clearly that, just as Rey held high anticipations for finally coming face to face with the legendary Jedi Knight she's long heard of, her expectations, like those of the fans, are about to be dashed.

Subverting expectations is a running theme throughout the film, where preconceived outcomes and character motivations are upended again and again. This occurs in many good ways, but also in some contrived ways and also in divisive ways. This certainly makes the film engaging and well paced. Although, there are plenty of nitpicks as a result. Some plot points end up being convenient, with some events that even feel world-breaking. There are many cool moments that are amazing to behold, but afterwards, on reflection, will leave you scratching your head. Such as whether or not light speed travel and gravity actually physically work as portrayed in the film, even in a world where the Force exists. Or why certain actions taken by either the empire or Rebel members made any sense when there were numerous other ways to tackle a certain situation.

Picking up where the last movie left off, Rey finds Luke Skywalker hiding on a lonely planet far from the troubles of the galaxy. There he is committed to being a hermit and letting the Jedi order die out. His attempt to raise a new generation of Jedi had failed horribly when his own disciple, Kylo Ren,  his nephew and the Son of Leia and Han, lost faith in him. This led to Kylo being completely consumed by the Dark Side; killing many of his fellow students and destroying Luke's Temple. But as Rey discovers, there was far more to what occurred back then between Kylo and Luke than Luke is letting on about. And Luke is deadly afraid of the emergence of a new power he's never encountered before in either Kylo or Rey.

Meanwhile, Leia and the remaining Rebel Forces are on the run from the Empire as usual. It's a race against time as the Empire has found a way of tracking them down no matter where they run to, and time will be up once they run out of fuel. So Poe and the just-recovered Finn, along with another new Rebel soldier named Rose, set out to try and sneak onto the main Empire vessel and shut down the tracking system allowing the Rebel forces a brief moment to escape undetected.

The film is largely one lengthy chase sequence between the Empire and the Rebels. Finn and Rose go rogue and head off to another planet to get assistance from an expert in order to break into the Empir introducing us to a new part of the galaxy and the political and monetary machinations behind the war. Meanwhile, Rey is still trying to convince Luke to return to the Rebels as the legendary Jedi Master; or at the very least to explain to her just what he discovered was so dangerous about the Jedi's existence that he would now seek to see it end with him. 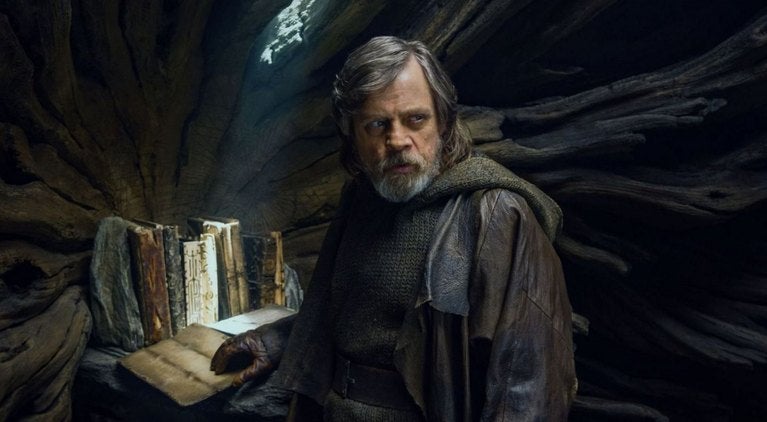 But Rey has her own personal motives for tracking Luke down, which has to do with her past as well as to control her burgeoning powers. But at the same time, the Force is drawing a closer bond between herself and Kylo Ren who both begin to sympathize with each other. But Kylo stands with the Dark Side while Rey is teetering on the edge between both, and Luke is reluctant to help her.

The Last Jedi seeks to finally transition the world of the old trilogy to the new one and pass the torch on from our old cast to the new cast. It seeks to do so in a way that really brings finality and put the previous era to rest. This is not to suggest that the characters of Luke and Leia don't still have role to play; though the passing away of actress Carrie Fisher certainly will affect Leia's role moving forward.

For anyone not too attached to the original trilogy and cast, the film is an enjoyable spectacle from start to finish. But if you had long held expectations of finally seeing Luke Skywalker back on screen as a Jedi bad-ass, then outside of a few significant moments, you're going to be left in the cold. A similar feeling may also come about with regards to several other things that might buck Star Wars Tradition. Especially with regards to the Jedi and the Force, which are something of a religion both in the movies and outside of them amongst the hardcore fandom. And particularly because the one character most interested in seeing this end are not the Empire nor the Sith, but Luke Skywalker himself.

In many ways, fans indeed can understand why certain outcomes were inevitable... particularly with the aging cast and knew the writing was on the wall for them, but one can't help but hope that the new trilogy of films could have at least delivered some of the things fans waited so long to see before putting and end to the past. 'Killing the past' is of course the main driving point of the movie in both the story, its character arcs, and with regards to the Star Wars franchise as a whole moving forwards. But we hoped that Disney could've at least granted some wish fulfillment for the fans before the send-off. And prequels like the upcoming young Han Solo movie aren't going to cut it.

Ultimately, we have to judge what's on screen rather than what we wanted. And what's on screen is an enjoyable experience, hampered by some internal inconsistencies, but a strong underlying theme that does help to look past it. But whether or not the cost is worth the effort will be up to the individual viewer. As it comes at not only the expense of classic cast and the past, but also some decisions will come at the expense of some of the new characters, whose intrigue and backgrounds made up half of our anticipation for 'The Last Jedi.' Now, with those questions being answered, or some vital cast removed from the equation, what does Episode 9 have as its hook? Though in a way it is admirable that Last Jedi does conclude many things as far as the main cast is concerned without resorting to any large cliffhanger. Though there is still a lot of work to do as both sides of the galactic war, lick their wounds and reorganize for a new round.

So the Last Jedi is good way to end a year at the movies. There's nothing after the credits if you were curious. But I'm sure you and your friends will have much to argue about after they've finished scrolling!
Posted by The Labyrinth at 10:04 AM