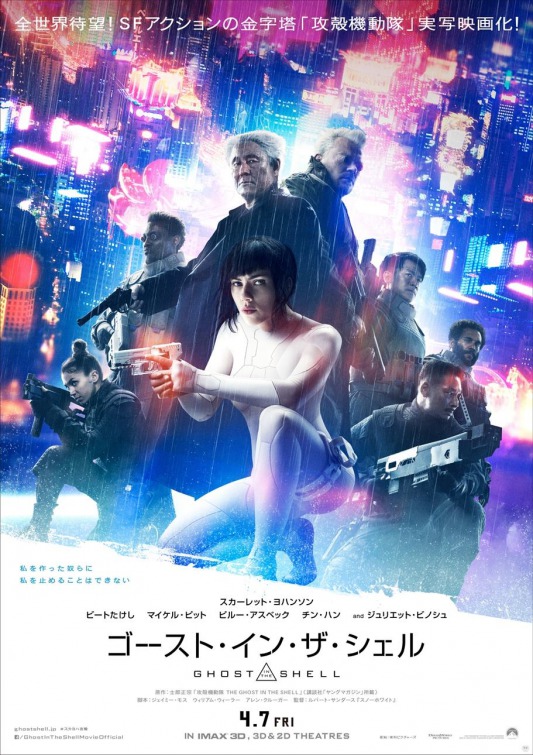 This is coming in a bit late, but as a fan of the franchise in all its animated/manga incarnations, I couldn't pass up the opportunity to give you my 2 sensei's worth of opinion about the Hollywood adaptation.

Unlike many people I was never concerned about the casting decisions. Frankly, as someone who has been making this movie in his own head for a good long while, I would've made similar casting decisions to set Ghost in the Shell outside of Japan and use that as a basis to explore what the rest of the world might be like outside of the future Tokyo. So take that as you will while I delve into this with a bit of a different approach compared to other reviews on this blog.

The problem with the Hollywood Ghost in the Shell is not that it is a terrible film (it's not really a good one either). But it is very unremarkable. There is in fact little there worth discussing within the film. For fans of the anime films, and even those who didn't like Mamoru Oshii's films; preferring Kenji Kamiyama's anime TV series; this is the biggest drawback. Oshii's movies, for all their overly philosophical pretense, actually do manage to be something worth discussing. The Hollywood Rupert Sanders movie, however, is more akin to 'Ghost in the Shell for Dummies.'

Whereas Oshii and Kamiyama try to break new ground with complex material, Sanders and his writers try to dumb it down and instead fill the frame with visual pomp and homages to all the material from the manga, Oshii films, the TV series; even the recent ARISE OVAs. I feel that video game creator, Hideo Kojima, said it best in his summary of the Hollywood movie. That while all the hallmark visuals and moments of Ghost in the Shell are in the movie, they are devoid of context. The filmmakers failed to realize why those particular scenes and moments existed. In a sense, Kojima referred to the Hollywood film as being only a 'shell' of the originals, devoid of the 'ghost' that gave them their spirit.

Another problem is that the film doesn't really take the time to comfortably show or explain the various abilities and things people in the future are accustomed to doing. So while those familiar with the franchise can more easily figure things out... newcomers may be left confused by the random things they see spontaneously occurring at any given moment. One example being dialogue between people who speak two different languages directly to each other during the same conversation without a translator. Those familiar with the franchise might more quickly grasp that in this world dialogue is automatically translated in each person's cyber brains. But in the film it is presented very awkwardly every time it happens.

If it's simply eye-candy you want with a helping of action, then the film could be satisfiable. But if that was what the filmmakers were going for, it would have been better to strictly make the movie all about that; rather than to clumsily maintain some of depth of the franchise; even to the cheesy point of having an on screen character basically spell out the themes you're supposed to think about.

Yes, the anime versions do have very verbose dialogue that you might think sounds the same as what the Hollywood movie is doing... but there is a big degree of difference. For one thing the conversations in the anime flow naturally from the fact that the Major and her team are essentially police detectives who are trying to figure out the motives, politics and philosophies of the groups and antagonists they are trying to apprehend. So in there it is a perfectly natural matter of necessity. The anime adaptation also avoids the cartoon-villainy on display in the Hollywood movie.

The other downside is that the American adaptation felt the need to focus on the Major's character and essentially adapt the story of Robocop in the process. Attempting to make the Major unique as a full body cyborg is in stark contrast to the anime/manga where this is actually quite normal in the world. There the Major is unique because she is the best at what she does in a world where many people are already like her. Despite all this, the Hollywood movie also doesn't really justify the Major's uniqueness in any remarkable way for their own story.

The other problem with focusing on the Major as a character is to detract from what makes the world of GITS appealing in the first place. It's because the franchise is more concerned with ideas rather than characters for which the cast is a vehicle. Sure we get bits and pieces of their lives here and there when related to the plot, but their pasts are otherwise left way out of the picture and the only thing that matters is their attitude, ways of thinking, and professional relationship to each other as far as working together to solve the case goes. The Hollywood film doesn't feature much of the teamwork present in the TV series nor the closer partner relationships of the Oshii films for that matter. At best Batou is featured as muscle to back up the Major. The film's antagonist, Kuze, a master hacker, is also a disappointment. There are a few stand out moments with some other characters, but largely there is not much for any of them to actually contribute to the movie.

The Hollywood Ghost in the Shell, is a disappointing venture. Given the movie's performance at the box office, its doubtful we'll see more of it; which sucks as this could've been a very good sci-fi franchise that could've served the studio very well far into the future if they cared.

Was it a problem that much of what made Ghost in the Shell great in the past had already been done from adaptations by many other sci-fi films during that time? Perhaps if you were strictly concerned with literally adapting the same areas Oshii had explored, topics that are not uncommon to other films such as the Matrix, Ex Machina, or Blade Runner. But to say that Ghost in the Shell couldn't be adapted in 2017 is incredibly lazy. There are so many topical things that it could've touched upon in our times from themes of terrorism, government surveillance, abuse of political power, social media, digital data manipulation, robotic and A.I. economies etc. etc. All this in addition to the themes of what ethnicities, sex, transhumanism, religion etc. mean in a world where people can be fully cyborg with entirely customizable bodies and longevity that may not even necessarily resemble anything human. There was much to choose from to make an entirely original work based on the shell of the original story that would give it new meaning and relevance for a universal audience living in this day and age.

That's the biggest crime of the Hollywood Ghost in the Shell - being a very big missed opportunity that fails to take advantage of a vast and infinite world offered to it on a platter.
Posted by The Labyrinth at 12:20 PM