Quite late on this one, so let's just make it quick...

Acting, effects, etc. if you've been keeping along with the Marvel films then you know what to expect and it's just as good here in those categories as you'd expect.

So what does matter really? Especially in a post-Bat Vs. Supes world where many seem to be feeling some fatigue and expecting more from their superhero fare?

In this case I'm pleased to offer the opinion that Civil War (the movie) may be the best story ever done so far in the Marvel Cineverse!

Would it be my favourite film? Well... I'd still give that to the first Avengers, but let's be honest, the only reason I do so is because the film was our first spectacular look at the team together and the first concrete culmination of everything Marvel was building up to.

We will NEVER have that moment again, and so Avengers 1 is very special in that regard!

But I will say that Civil War is the best story of the lot, and a much better Avengers film than Avengers 2.

Civil War succeeds in all the ways the 2nd Avengers & Batman Vs. Superman disappointed me. 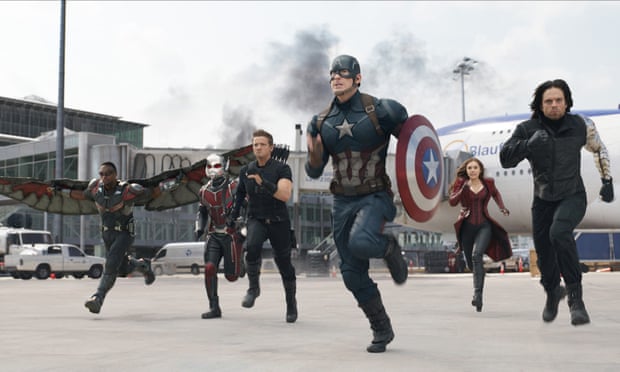 The first being a focus on Stark and Cap, but not to such an extent that the other main supporting cast members - notably Vision, Scarlet Witch, Black Widow & the Winter Soldier all get their time in the spotlight. Notably the Winter Soldier who is somewhat the suspected antagonist for much of the movie and is what triggers the division between Iron Man and Captain America.

What's that? Yes I'll say the driving factor in the Civil War movie is more about trust or mistrust and bringing in the Winter Soldier than it is about the Sovokia Accords, which is the equivalent of the Registration Act lifted from the Marvel event upon which this film borrows its title. But here it's more of a smaller scale affair wherein it's about whether or not the Avengers act in compliance and under the watch of the United Nations. So not so much about superhero identities. Tony Stark, who feels responsible due to his past as an arms dealer and for releasing Ultron, understandably feels he needs to be reigned in. Steve Rogers, who having to deal with the fallout of Hydra taking over SHIELD, and knowing his experiences during war time is understandably sceptical and mistrustful of having others oversee him and decide when he will act or not act according to agendas he cannot see that may actually prevent him from saving lives.

Everyone else on the cast also has their opinions that will be expressed as the film unfolds.

There are also other appearances of lesser note (to the overall story). War Machine is there, so is the Falcon & Hawkeye as well as Ant-Man. Some roles more relevant than others, but their inclusion is well worth having them.

Then there's the new-comers. The most notable and relevant is the Black Panther who is actually a big contributor being involved in the story in such a way that he ties up a big theme in the end and therefore has a purpose here. Well done!

The other big anticipated new inclusion is Spider-Man! Unfortunately Spidey doesn't have a big role here except to show up in an incredible fight sequence between both sides which is one of the best superhero action set-pieces you'll ever see on the screen! But Spidey is obviously a tacked-on inclusion. And it'll certainly feel that way. But when he starts swinging around and stealing shields and cracking wise, you'll happily forgive this and indulge in what certainly looks to be my favourite movie version of him so far!

Civil War is thoroughly entertaining from start to finish. It has its story moments of convenience to move pieces around, but the sum is greater than its parts and it comes together spectacularly! Thankfully, the 'set-ups' for future films are much more inclusive in the story and don't feel put in there for advertisements of upcoming films. There's more about that after the credits too! One mid-way, the other at the very very end, so stay in your seat if you enjoy these little teases.

The other strong point of Civil War is that major character arcs occur that feel real, in a sense that the results feel like a natural culmination of events so far. Of course Marvel has done a good job of getting us to this point so the film assumes audiences have followed along and doesn't waste time reiterating events or persons except where it's entirely relevant to the plot that kicks off. The other good point is the villain. A much more low-key character, but wisely chosen such that the primary conflict remains between Stark and Steve and with both holding entirely reasonable views it's hard to know who to root for and it tears at our hearts to see the division.

So okay, I guess this wasn't so quick, but if you haven't seen Civil War yet, or if the superhero genre's got you down, I highly recommend giving this one a look as it just might be the boost you need to get you excited about the Marvel films again!
Posted by The Labyrinth at 8:45 PM