Animation software OpenToonz, which is used by many studios, most notably Japanese Studio Ghibli has been made open source and available for absolutely FREE! And you can also download the same tools that Studio Ghibli used for their process!

"With one announcement, the animation software game may have changed forever. Toonz, the software used by Studio Ghibli to produce films like The Tale of the Princess Kaguya, Howl’s Moving Castle, Ponyo and The Wind Rises, will be made free and open source to the animation community beginning March 26, 2016.

The deal, which could have a potentially profound impact on the animation industry, was made possible after Japanese publisher Dwango acquired the Toonz software from Italian tech company Digital Video, which has been producing the animation package since 1993.

Ghibli has been using Toonz since the production of Princess Mononoke, and the new OpenToonz is dubbed “Toonz Ghibli Edition” because of all the custom-features that Toonz has developed over the years for the legendary Japanese studio.

Atsushi Okui, executive imaging director at Studio Ghibli, explained that they initially chose Toonz back in 1995 “in order to continue producing theater-quality animation without additional stress,” and a desire for software that had “the ability to combine the hand-drawn animation with the digitally painted ones seamlessly.”

However, Toonz is not exclusive to Ghibli and is used by plenty of other studios, including Rough Draft, which produced Matt Groening’s Futurama with it, and Folimage, which used it for its recent feature, Phantom Boy.

Digital Video will continue to develop and market Toonz software, and will offer installation, configuration, training, support and customization services to studios. A premium version will continue to be sold at a “very competitive price” for companies who wish to invest in the customization of Toonz for major projects.

“The contract with Dwango, which offers the Toonz open source platform to the animation community, has enabled Digital Video to realize one of its strategies, i.e. to make of Toonz a world standard for 2D animation,” said Claudio Mattei, managing director of Digital Video. “This deal will be also the starting point of a new exciting plan to endorse the open source business model, by supporting training and customizing Toonz for the old and new users.” 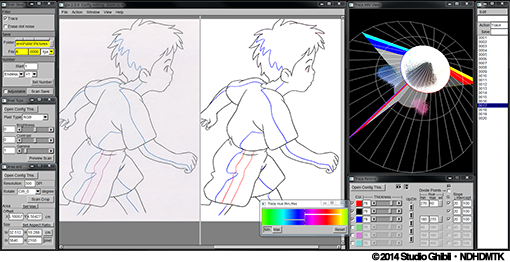 Posted by The Labyrinth at 9:57 PM