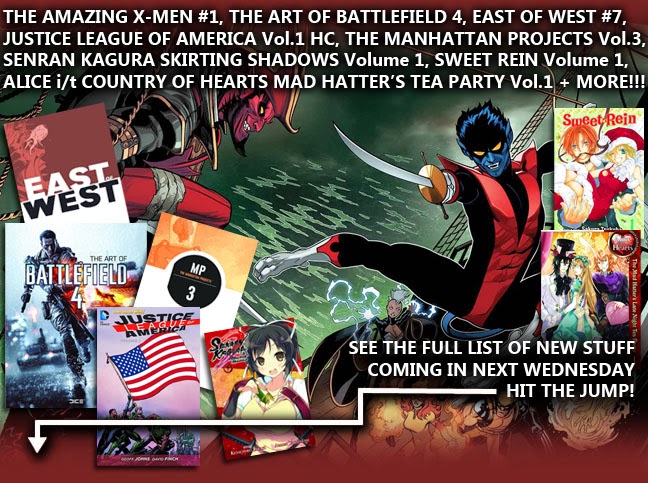 ART BOOKS
*This Week's Highlights!*
- Fans of EA Games and DICE's Battlefield will want to get their hands on the new 'Art of Battlefield 4' artbook coming in this week with an in-depth look at the latest game's creation with lots of concept art!

- From Enrico Fernandez, we've got his latest bande desinee and it's sketchbook straight from the artist, and the comic is in English!

- The 'Essential guide to 50 years of Doctor Who' contains fascinating facts about all eleven incarnations of the Doctor on his adventures in space and time, as well as his helpful companions and fearsome foes! Get it this Wednesday!

- A new Artist's Edition arrives, this time featuring Jeff Smith and his work on BONE: The Great Cow Race!

- 'THE ART OF THOR: THE DARK WORLD' provides an insider's look into the making of the highly anticipated film!

- Women worked in comics and cartoons too! Learn all about them and their fantastic work over the decades in 'Pretty in Ink: Women Cartoonists 1896-2013'! Out this week!

- All great ideas begin in scribbles on sketch pads and napkins! This is where artists discover interesting concepts and shapes and forms that will become their masterpieces! But what is their thought process behind it? If you're eager to learn, then pick up 'Sketching from Imaginism: Insight into Creative Drawing' where 50 talented artists display and explain their the process behind their sketchbooks!

- Fans of fantasy artist Dan Brereton will want to grab his 'Sorceress' book releasing this Wednesday with all new art, a must-have for any collector!

COMICS
*This Week's Highlights!*
- In the near future, one man will be introduced to an X5 android. What shall develop between 'Alex + Ada'? Find out in the first issue arriving Wednesday!

- An amazing new era for the X-Men begins with the first issue of 'Amazing X-Men' featuring a wraparound cover as our heroes try to bring back the fan-favorite Nightcrawler!

- Coming in a special horizontal storytelling format is the 5th issue of 'Batman Superman' with the ultimate fighting game that puts killing the Batman as the main objective! Don't miss out!

- When the Age of Ultron ripped a hole in the universe, Galactus came through and he's taking on the Ultimates! Don't miss the big event in Ultimates' history with 'Cataclysm Ultimates Last Stand' #1, available Wednesday!

- From Bedlam's Riley Rossmo comes a new series, previously known as Strangeways, but is now 'Drumhellar' and the first issue arrives with our paranormal detective and his werewolf ex-girlfriend and a thieving demon. Strage times are ahead!

- Death begins his great hunt in the 7th issue of 'East of West' coming over the horizon this Wednesday!

- The 3rd issue of 'Forever Evil' comes with an unlikely hope - Lex Luthor?

- Everyone's after Longshot, but can even the luckiest X-man survive the odds? See how he fares when the first issue of 'Longshot saves the Marvel Universe' rolls in this week!

- Follow the tale of the adrenaline filled soldieress back on a mission to protect a Saudi Arabian princess from people who want her dead! The first issue of 'Painkiller Jane - Price of Freedom' comes in with a back story of her origin!

- From J. Michael Straczynski comes a new series about heroes without any super-powered bad guys but with lots of corporate sponsorships and polite rivalries, until someone turns up dead... Check out the first issue of 'Protectors Inc', out this Wednesday!

- Fans of Regular Show will want to check out the new spin off featuring the park's enigmatic yeti groundskeeper. Pick up the first issue of 'Regular Show - SKIPS' this week!

- Superman and Wraith go at it while Ascension begins their attack! Don't miss the 4th issue of Scott Snyder & Jim Lee's 'Superman Unchained'!

- Shockwave pulls off his masterplan to destroy the Autobots & Decepticons and remake Cybertron in the first issue of 'Transformers Dark Cybertron'!

MANGA
*This Week's Highlights!*
- Visit a highschool made up entirely of supernatural creatures with Himeno, a sweet, shy centaur girl in the first volume of 'A Centaur's Life'!

- Alice in the Country of Hearts continues to expand with the first volume of the 'Mad Hatter's Tea Party', availabe this Wednesday!

- You know that fighting game with the buxom ninja girls? Yeah, that one. Well, it has a manga now. If this one's up your alley, then check out the first volume of 'Senran Kagura Skirting Shadows'!

- When Kurumi Sagara goes for a walk, she knocks into a boy, who's actually a disguised reindeer. But by becoming bound together, she is now his master, and that therefore makes her a Santa Claus. It's a Christmas miracle that you can read when the first volume of 'Sweet Rein' comes down our chimney this week!

- Assassin's Creed fans can now collect the entire 'Ankh of Isis' trilogy in one book following 3 generations of assassins when it arrives asa  hardcover this week!

- Those waiting for the softcover version of 'Batman Night of the Owls' can finally have it this Wednesday!

- The acclaimed NBC series 'Grimm' has its first graphic novel volume releasing this week revealing dark secrets and death for our cast!

- The first volume of 'Invincible Universe' collecting #1-6 finally arrives continuing the aftermath of 'Invincible Death of Everyone' and bringing together the heroes from across the universe!

- They may not be the world's greatest super heroes, but they are the most dangerous! The first five issues of 'Justice League of America' are collected in the first hardcover volume available this Wednesday!

- The first volume of Mark Waid's 'Green Hornet' comes in with the legend in danger of being tarnished by his own alter ego's arrogance. Check out the new era for this pulp hero!

- Marvel heads back to the Eighties with this first classic collection of the decade's most dazzling debuts! Fans of teh classics won't want to miss 'Marvel Firsts Vol. 1 - 1980s'!

- Fans of the hit game 'Plants Vs. Zombies' will want to check out the graphic novel from Dark Horse where a crazy inventor and his neice and another young'un fend off the undead from a home invasion. 'Plants Vs. Zombies: Lawnmageddon' is available this Wednesday!

- Two estranged adopted brothers reunite after their father's death leading them to become a crime-fighting team of superheroes who intend to go big or go home. Check out the first volume of 'Quantum & Woody' collecting the first 4 issues by Thief of Thieves' James Asmus!

TOYS
*This Week's Highlights!*
- New action figures from Batman Arkham Origins are coming in along with more of Injustice's Catwoman/Doomsday set!

- A talking Adipose plush toy from Dr. Who is coming in! And does she come with the toy? No...

- A lil' Link plushie arrives in for fans of the Legend of Z!

- Eight of your favorite My Little Pony covers come in a high quality artist's portolio, with 11" x 17" prints that are going to knock your socks off! Bronies won't want to miss this!

- New POP figures are in of characters from Regular Show!

- Walking Dead Monopoly? Whatever will they think of next?!!!