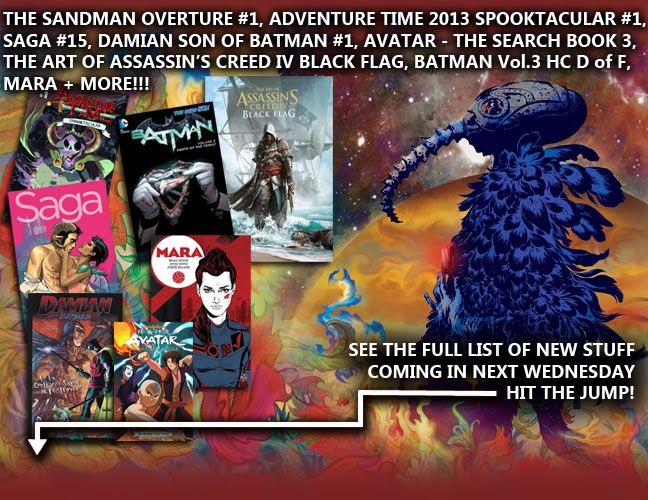 ART BOOKS
*This Week's Highlights!*
- Lots of new Japanese artbooks came in this week, including restock of old favourites! You can drop in right now to see them! Some other new art books have also arrived in Oakville and will be making their way to Toronto this week!

- The artbook for the newest Assassin's Creed game 'Black Flag' is now available!

- Dr. Who fans will want to get their hands on a new book coming in collecting 50 years of the cult hit's unseen and iconic material from photos to artwork and tons more from the BBC's archives and private collectors! Check out 'Dr. Who Vault Treasures from the First 50 Years' transporting in this Wednesday!

- The official companion guide to the upcoming movie adaptation of 'Ender's Game' is playing its way into our store this week! So stop in to check out the inside world of this epic adventure!

COMICS
*This Week's Highlights!*
- Get into the Halloween mood with 'Adventure Time's 2013 Spooktacular,' & first issue of 'Ash & the Army of Darkness', and the annual for 'Herobear & the Kid'!

- Some more DC #1 Annuals are also coming in, and it's Aquaman & Nightwing!

- Marvel's Ultimate universe prepares for the last stand between the Ultimates and the Devourer of Worlds! See how it begins in 'Cataclysm' #0.1!

- The story of Damian Wayne, the son of Batman, begins in the first issue of a new mini-series this week! Don't miss 'Damian Son of Batman' #1!

- The final issue of 'Deadpool kills Deadpool' comes in and... well... let's just say there is a serious end in store for issue #4! Like serious dude! Srsly!

- With the Justice League dead, the remaining scraps of A.R.G.U.S. agents have to save what's left from evil! Join them in the first issue of 'Forever Evil Argus' #1!

- From the world of the New Crusaders comes the debut of the pulp-style high-flying FOX! Grab the first issue of this new Red Circle series from Daniel Haspiel & Mark Waid!

- The war for Earth begins in earnest as the heroes rally to defeat Thanos in the 5th issue of 'INFINITY', happening this Wednesday!

- The 4th issue of 'Kick-Ass 3' finally drags its butt through the door! Will Kick-Ass stand up to the laziest member of his team? Will the Red Mist survive the education he's to receive from the most terrifying crime boss of the Family?

- My Little Pony fans have two items to look forward to this week with the 12th issue featuring Shining Armor trying to woo Princess Cadence to the school dance, alongside the special oversized 2013 Annual where the ponies look like MY LITTLE PEOPLE!!!

- The 15th issue of SAGA comes in with a romancing cover!

- Out BIG, MOST ANTICIPATED title in awhile is appearing this week! And it's Neil Gaiman's return to his beloved character to tell us the story about how he got captured in the first place! Don't miss out on the first issue of 'The Sandman Overture'! Available in two covers!

- Two superior issues are arriving for the 'Superior Spider-Man' with the first Team-Up Special with Otto facing his doppelganger, and the 20th issue where the fallout of Necessary Evil starts to introduce new twists and turns as the Black Cat comes calling!

- Thor, Sif and the Warriors Three... and Loki... are out on a new Asguardian adventure seeking the Crown of Fools, + the reprint of Malekith the Accursed's first appearance, all in the first issue of 'THOR Crown of Fools'!

- The biggest battle of X-Men history draws to a close and changes the world! See the face melting conclusion in the 2nd and final issue of 'X-Men Battle of the Atom', out this week!

MANGA
*This Week's Highlights!*
- The 8th volume of the highly popular 'Attack on Titan' is now available! See where the anime left off, and start following the story here!

- Our second BIG item this week is the conclusion of 'Avatar the Last Aribender - The Search' with Aang parleying with an ancient power to bring Zuko ever closer to discovering the truth about his mother... and yes, Azula still be crazee!

GRAPHIC NOVELS
*This Week's Highlights!*
- The third BIG item this week is the 3rd volume of the New 52's Batman arriving in hardcover & collecting issues #13-17 containing the Death of the Family Arc with the Joker making his horrifying return to Gotham. The first printing of this volume has an acetate cover with the face of the Joker as it appeared on the die-cut covers, and underneath that lies the Joker's skinless skull! Don't miss out on collecting this one!

- Fans of the hit video game 'The Last of Us' will be interested in the prequel graphic novel about Ellie's life before meeting Joel & Tess! Pick up the collected trade of 'American Dreams' this Wednesday!

- From acclaimed writer Brian Wood comes the completed trade of MARA, the story of a gifted woman in a sports and war obsessed future who begins to manifest superpowers that make the world turn on her!

- The first volume of 'Samurai Jack Classics' comes in this week with a collection of classic Samurai Jack stories from his origin to the first of his tales of his battle against Aku!

TOYS & SHIRTS
*This Week's Highlights!*
- Got some new T-Shirts in! With Batman Beyond, Dr. Who & Pacific Rim, and also, a neat Futurama Bender's hat just in time for winter!

- A new plush of the character Marshall arrives for Adventure Time fans!

- A new classic Catwoman figure arrives in alongside a 2 pack figure set of Catwoman and Doomsday from Injustice!